Church architecture is a pretty huge topic to cover, libraries full of books have been written on the subject after all. For our part, we’re going to look at the early beginnings of churches, what they entail, and how that evolution took place. From Ancient Rome to the Middle Ages, this time on the Associated Crafts & Willet Hauser blog!

Church Architecture Through the Ages

First a little definition work, to drive home the exact scope of what we are discussing. Church, believe it or not, is a specifically Christian word. There are many different religions, with many different houses of worship, Judaism has their synagogues, Islam the Mosque, So for for this discussion church specifically means any building used for public Christian worship. This also has the benefit of creating a clear timeline to look at, Christianity has a known ‘start date’ if you will.

During the first three centuries of the Christian church, the practice of the religion was illegal and few churches were constructed. Practitioners worshiped in secret, and in the beginning the ‘church’ was simply the homes of the wealthier believers.

When the religion became legal and favored, the Roman Empire was still in full swing and as such the church as we know it came from the Ancient Roman style of architecture. Atriums, naves, aisles, narthex, all of these types of rooms and features were present in the Roman buildings of the day, basilicas. These were public buildings that served for official and public functions. When churches began to built they reflected that style of the time.

A quick rundown of those features:

Another key addition to the style was the cruciform layout, reflecting the Latin or Greek cross.

Did You Know: The Highest Nave is the St. Peter’s Basilica at 151 ft tall! 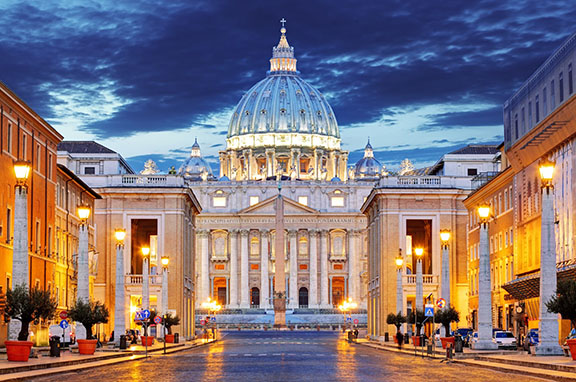 In the fourth century, as the Roman Empire split into two, the structure of the church also two distinct shapes. While Western Christianity continued to keep the form of the basilica traditionally, the east developed a more compact, centralized building style. They were square, or cruciform with shorter ‘limbs’ and roofed with domes.

In the West, the middle ages brought new church styles and as the practicing of Christianity developed further. In the 10th and 11th century, Benedictine monks began to use stone more widely in their buildings, allowing churches to become larger and larger.

Numerous factors affected the style of church built in the later middle ages. When churches were built, they reflected the values and wealth of the communities they served, as well as the representative of the church who lead it, whether it was a church, an abbey or event a collegiate church. In this way they reflected the people who would be worshiping inside them as much as they attested to their beliefs.

Northern Europe built churches completely out of wood, wealthy communities built great cathedrals with adornments, stained glass, and more. As Christianity spread across the continent the traditional basilica layout still saw use but just as the believers grew so too did the styles of church architecture.

As we mentioned, the subject of church architecture can fill books upon books, documentaries, and more – we barely scratched the surface of the topic! We hope this has satisfied your curiosity, but if you’re looking for more on the actual building process, might we recommend Cathedral by David Macaulay.

If you are a community in need of stained glass window restoration, inspection, or appraisal, Associated Crafts & Willet Hauser are the craftsmen you’re looking for. With over 120 years of history creating and restoring precious stained glass art, we are the premiere U.S. stained glass studio.